I was always a big fan of Prince Imrahil in the Return of the King and was very disappointed not to see him named in the Lord of the Rings movies though I do understand that with a limited amount of screen time that a lot was not possible.

When i got into the Lord of the Rings/ Hobbit Strategy Battle Game in 2012 I had already missed the boat for a lot of the Fiefdoms models and they had already gone out of production and so I picked up those I could: That being Prince Imrahil and a couple of boxes of Dol Amroth Knights on Horses, Though it would be a number of years before i would do anything with them.

Over the next few years I would trawl the trade pages and sites to buy all the Dol Amroth and Fiefdoms models that I wanted to build the army I wanted.

My painting ability has never been much more than to get models painted to a tabletop standard and then get them on the table to use them, my Fiefdoms however would not be like that, I put off painting them for years because I was worried that I would not be able to do them justice and i am still not sure I will be able to but have decided that since i seem to be really lacking in Good armies that 2018 would be spent focusing on getting as many good armies painted as I can.

Some of the other armies I will be working on in 2018 are the Mirkwood army that I have already spoken about, an Erebor Reclaimed army that is currently built and Primed, this will be Dain on his pig, Thorin and Dwalin on Goats and Balin on foot, leading a mix of Goat Riders and Iron Hill’s warriors, in the not to distant future I will put a post up to show where the army is to at the moment and the conversions I have done for Thorin and Dwalin on goats. I will also be working on a Grey Company army, Well actually 2 though they will be variations of the same army, The main army will be made up of Aragorn and Halbarad leading Rangers of Middle Earth and as many Rangers of the North as I need to allow me to take 100% bows. The other variation of the army will be Arathorn II with Elladan and Elrohir leading warbands of Rangers of Middle Earth and as many Dúnedain and Rangers of the North I would need for the 100% bows.

At the moment the above are my planned armies for 2018 though I will almost certainly add to this and add to existing armies that I already have.

I have made a small amount of Progress with my Fiefdoms, I decided to start simple and paint a mix of models. I opted to begin by painting:

1 Captain of Dol Amorth on foot

5 Knights of Dol Amroth on foot

My Instructions for painting so far:

The Shields I did a little different.

This is the point I am at with my Fiefdoms at the moment, I felt like I should be doing better with them so I decided that i would benefit from taking a break from them.

A model that I am really looking forward to painting and using is Forlong the Fat, during my time or searching for the out of production models i was able to get myself 2 of this model as I wanted to do a conversion of him mounted.

I used the Warg Attack Theoden mounted model as the base of the conversion and then cut Forlong in half and fixed him to the model, I must admit I am not 100% Happy with it and I do plan to extend his spear at the bottom before I paint him, but this is what he looks like currently. 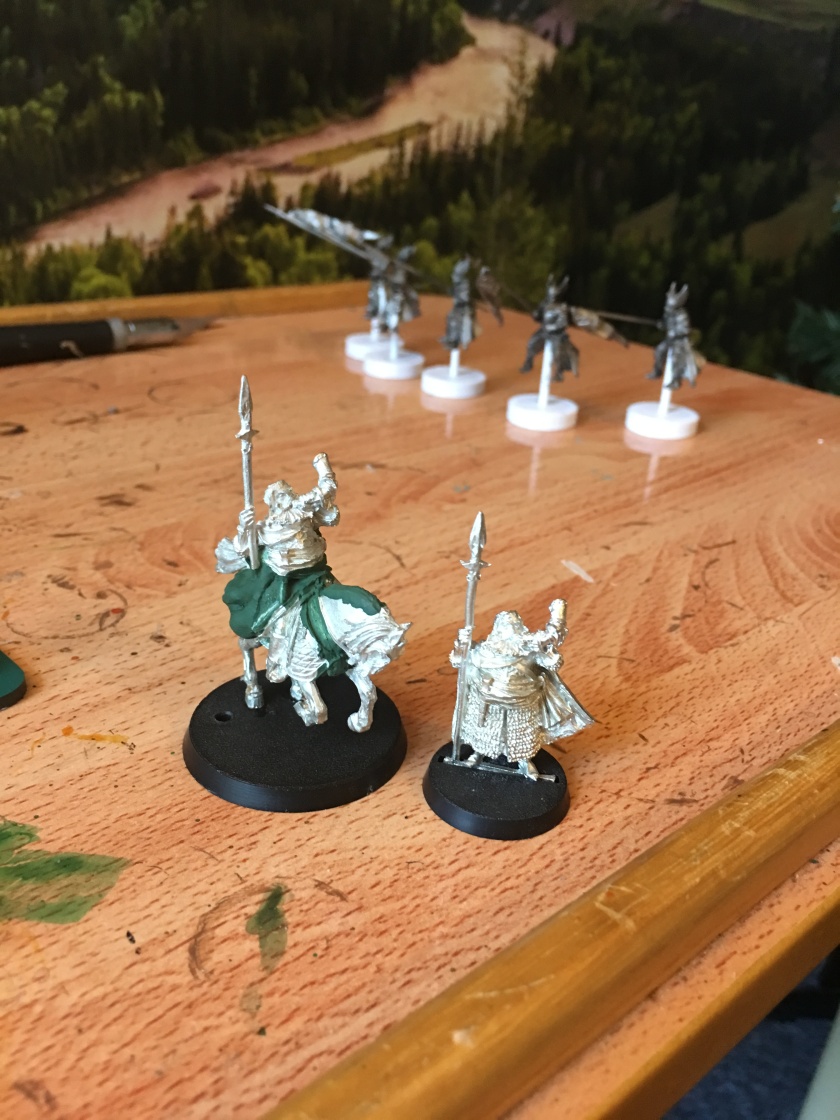 As I said this is my progress so far and I will come back to this and update it when the models are finished or when I have made more progress.