I have always been a film believe that its how we base miniatures that really finish them off and so for that reason I am a huge fan of Generationshift92 bases and have used them for my Azog’s Legion army and my Dol Guldur army as well as having plans for them on future projects.

I find that a lot of the time people are so desperate to get their models on the table that often the bases get neglected, even though there are some simple ways to base models to really tie them all in together and make the army look great.

To show this I decided to do a few bases the weekend in a way that I find really quick and easy to do but gives a really nice effect. It is what I use on most of my models though the colours may alter from one project to the next.

At the moment the most recent models I did the bases on were my 200 points of last alliance for our Tales of Middle Earth  slow grow. The theme of these bases is Mordor as I want it them to represent the siege of Barad-dûr and so I have gone for a grey dusty base.

Below are 3 examples of bases that i will use to represent different terrain in an area.

The first one (on the left) is just sprayed grey and then covered with PVA glue and dipped in sandpit sand, I use this as it is very fine. This is to represent the flatter areas.

The second one (In the middle) is just sprayed grey and then covered with PVA glue and dipped in to fine slate ballast. This is to represent the very rough areas that would not normally be walked.

The third base (on the right) Is a mix of the two, I put on a few areas of PVA and first put apply the fine slate ballast and then i paint PVA into the gaps and apply the sand. This gives the look of ground somewhat in between the two above.

Once the PVA has dried I give the bases a heavy wash, for these as i wanted a dusty grey I decided to use Agrax Earthshade. 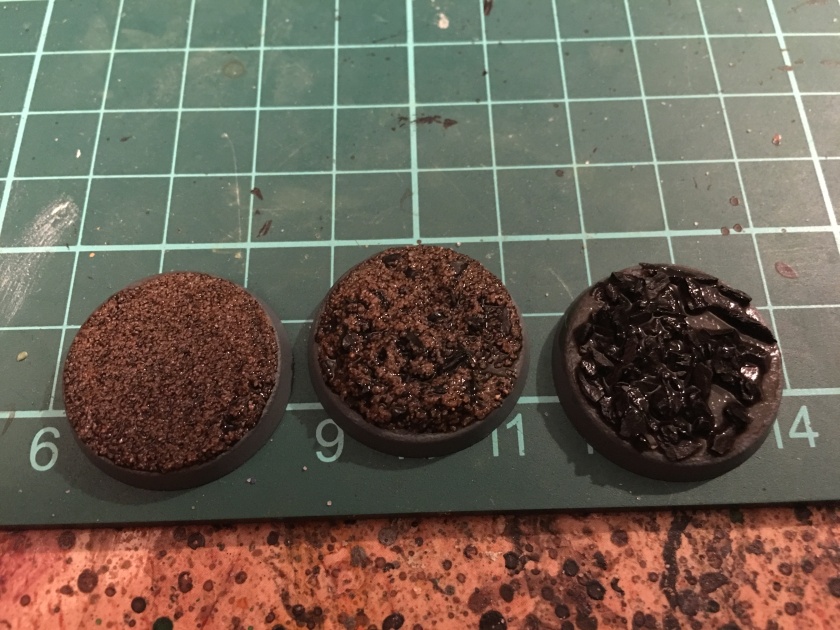 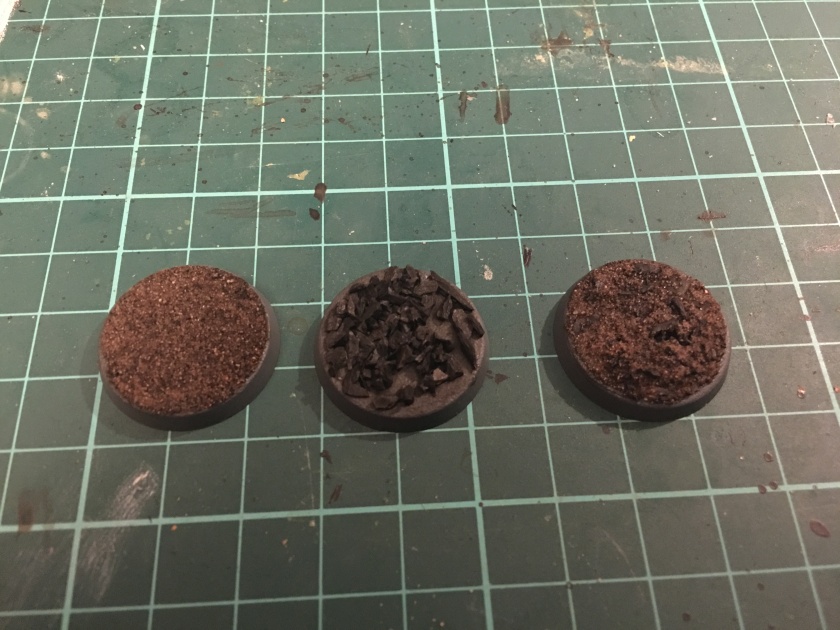 Once they had dried i decided that they were still looking a little light and so decided to give them a second wash with Agrax Earthshade again.

After the second wash had dried I was happy with the colour and so started the first drybrush. I went over all of the bases with a fairly heavy drybrush of Longbeard grey dry paint.

At this point I decided to put some flock on them, in some cases I would have given it a drybrush with another colour but I am content with how they looked here so then I applied some scorched grass flock.

I then added a couple of pieces of loose foliage to finish the base off and it is complete.

Above are the finished bases. These are really quick and easy to complete and can add real character to your models and help them all tie in together.