On Wednesday the 1st of August our local gaming club played our monthly sessions of Adventures in Middle Earth, Part 4 and 5 of the story can be found here.

The party began this adventure feeling very tired! Having just chased down and killed a swamp troll they were feeling worse for ware and in need of rest, though before they could do that they would need to make sure the area was safe and that there were no more trolls in the area.

It didn’t take Duilin long to find the tracks that led to the troll cave, hidden behind reeds on the bank of the river the party made their way inside the damp cave, The smell was quite too much for Olaf and the creaking sounds that came from the cave were very alarming, the only two that pushed further inside were Nain and Ted Took who were able to secure themselves some of the trolls loot in the split seconds before part of the cave collapsed and would have surely trapped them all if they had been inside.

Nain had managed to escape the collapse with a small chest of gold, while Ted Took was only able to grab a bundle of items that contained half a dozen hobbit walking stick and a small dagger in a leather sheath with elvish writing on it that Edrahil told Ted that it meant “Ever Sharp.”

This was quite enough adventure for the whole party at this point and confident that the area was now secure they made their way back to the camp to get a well deserved long rest (The DM has said that because we had cleared the area and made it safe that we could take a long rest here…….The first one since we set off!) The group sat around the fire very quietly as nobody had much of anything in the way of energy left in them and they ate a small supper and one by one went into their tents to sleep having arranged an order that they would each take watch. Olaf went first and used the time to write some notes in his diary to catch up on the events since his last entry, he knew that when he would get home nobody would believe that he and his companions had killed a troll and at that moment he realised that he was day dreaming about going home and all of a sudden did not feel so bad about the rest of the journey, the way the group had worked together to take down the troll had filled him with confidence and he had a much brighter outlook on what was to come.

After Olaf’s watch he woke the next watcher and went to bed, The watches continued throughout the night.

The final watch was Edrahil and he decided that he would conduct his watch form the woods not far from the camp. He was in these woods when he began to hear noises coming from up stream, it started as some rustling noises but as whatever it was got closer he began to hear muttering…….”The thieves…….they stole it, our beautiful boat. We should squeeze them for it.” Edrahil had paused to listen more closely  “No precious, too many, too many. We takes it and goes, quick and quiet.” and in a flash Edrahil shouted a warning at the skulking figure now visible to him.

Olaf and the others were woken by the shouts and the whole party were quickly out of their tents and ready for action.

Almost as soon as the whole party were out of their tents they heard shouts and growls coming towards them. They were all alert and ready for anything as a scouting party of Orcs, Goblins and Wargs came bursting through the trees shouting and screaming “get him… get the little wretch for the master.” Within moment they were upon them and a fierce combat broke out. 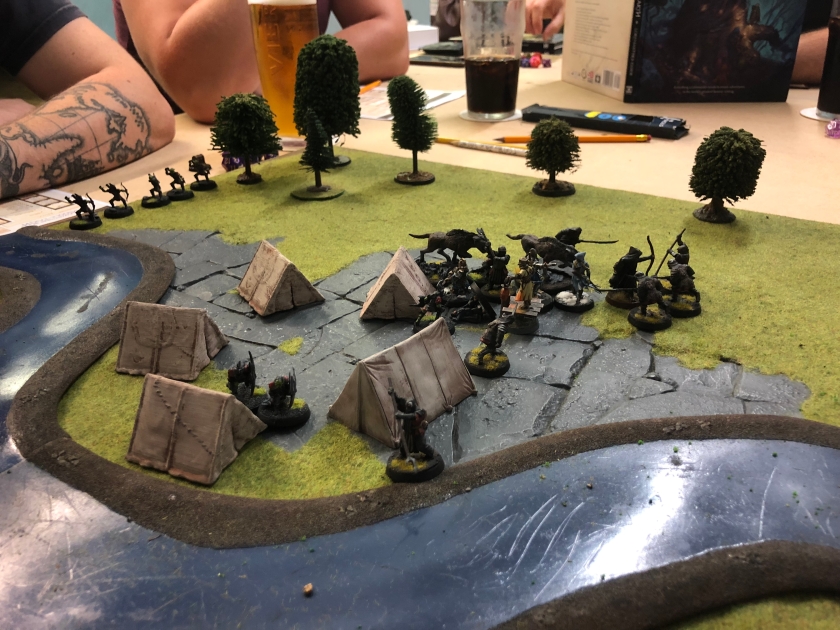 Goblin arrows screamed past the ears of the party as they fought the attackers, the leader of the orcs a large orc was barking order at the orcs in a foul tongue and it seemed like they were looking for something throughout the combat

The party were fighting with a renewed strength having been able to get a good nights rest and were able to hold back the attackers and even slay the leader of them but as they did a small group of them that were coming from the side did not move in to attack but instead grabbed the creature that Edrahil had first spotted and forced it into a sack then all began to retreat, they signalled the others and the ones that had not fell in combat retreated with them and it became clear that they were not after them but instead after the creature that was skulking near the camp.

The party stood in the dim light of Olaf’s lamp with the corpses of orcs, goblins and wargs littering the floor around them in a state of confusion having no idea what had just happened and what the orcs could possibly want with the creature. The rest that the party had gained from the full night sleep was short lived as the whole ordeal of what had just happened left them feeling all rather exhausted (gain 1 level of exhaustion) and this was all a little much for Ted Took who collapsed onto the ground next to the tents (Level 5 exhaustion for the hobbit.)

The group were able to pack up the camp at first light and make their way towards Rhosgobel in the Vales of Anduin.

Below is a copy of the journal kept by Olaf to record his journey.

Part 7 can be found here.