As I have said in the part 1 and part 2 posts: our local Wargaming club are doing a Tales of Middle Earth slow grow, where we start with a 200 point army and every month we add 200 points to the army.

This post will cover the next two members of the club and the armies that they will be building.

Charlie is going to be painting a Hero army based around Beorn.

James is going to be painting Iron Hills as his next army.

For month 1 James is going for an Iron hills Captain, an Iron Hills Warrior with a banner, 5 Warriors with spears & shields and 2 Iron Hill warriors with crossbows.

I am sure this will make a welcome change for James as his two current Middle Earth armies are Goblin Town Goblins and Hobbits so I am sure he will enjoy not having to paint a horde and then not having to move a horde when he gets them on the table.

The next post will be the last two that have confirmed they will be be taking part to get armies painted, this will be updated if others decide they want to get involved.

Dave who is painting a Mordor army

Paul who is going to be painting 200 points a month but not of a single army, Paul is relatively new to Middle Earth SBG and has a small Durins Folk and Mordor army that he will be expanding by painting a mixed 200 points per month.

As I said in Tales of Middle Earth our local Wargaming Club are doing a Tale of Warlord/ Slow Grow for Middle Earth Strategy Battle Game and I thought I should show you what some of the others are doing, this will be done in two posts as I dont have photos yet for everyone but will start with the ones that i do have photos of.

Phil is going to be painting the White Council for his next army.

For Month 1 Phil is going to be painting Armoured Glorfindel and Arwen. 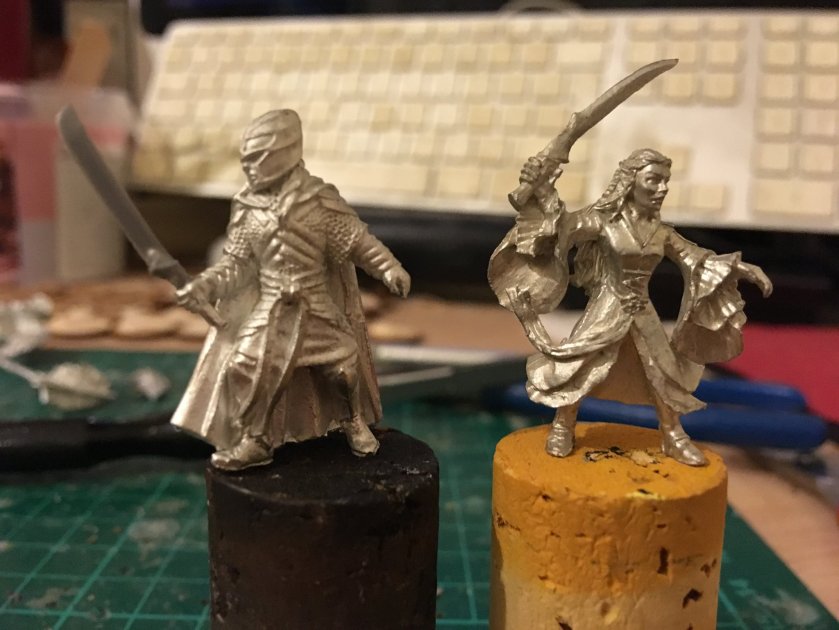 Andy is doing to be painting his Dunlending army for his next army.

Andy runs his own Facebook painting page to showcase his work.

For Andy’s month 1 200 points he will have: A Dunlending Chieftain with a 2 Handed Weapon and 14 Dunlending Warriors. of the 14, 5 will have 2 handed weapons, 5 with shields, 3 with bows and one with a banner.

As a hero can only lead a warband of up to 12 models it will mean that when we play some games with our month 1 armies that Andy will be slightly down on points as he will have 2 warriors that will not be able to take part as there is no hero to lead them, though as its only a bit of fun to get more armies painted I dont think he will mind.

we have at least 4 others at the club that will be taking part in the Tales of Middle Earth and as soon as they send me some photos I will put a post up to show what they will be working on.

The other 4 that have confirmed they are taking part are:

Charlie who will be doing a hero army focused around Beorn.

James who will be doing an Iron Hills army.

Dave who will be doing a Mordor army.

Paul who will be doing it slightly different as he will be painting 200 points a month but a mix of Mordor and Durin’s Folk to add to his armies.

As we have a lot of Good armies, I will be trying to paint an Evil one as well but it will be much less of a priority as my good army as I currently have a reasonable size Azogs Legion, Azogs hunters, Dol Guldur and Isengard army. I do have a Harad army that I have built and sprayed so I will be trying to get that done if time allows.

At our Local Wargaming club we have just started (1st of March) a Tale of Middle Earth that is a variation of the White Dwarf’s Tale of Warlords, in that we are going to start by painting a 200 point Middle Earth SBG army in month 1 and then adding 200 points per month.

I have decided that I am going to do a 2nd Age Last Alliance Army and so for month 1 so I have gone for Gil-galad leading 5 High Elf warriors with a mix of weapons.

My intention is to follow the events that took place in the 2nd age as best I can, this will be done by starting with Gil-galad as above and then month 2 I will be adding Elendil with some warriors of Númenor, the idea being that Gil-Galad and Elendil meet at Weathertop, for this reason I will then add Isildir and some more warriors of Númenor for month 3 and they will then set off to Rivendell to meet with Elrond, that will then form my month 4: Elrond with as many high elf warriors as I can, then like in the story they will spend time in Rivendell preparing for the battle and so I will then add Warriors of Númenor and High Elf Warriors until I have the army to a point where I am Happy.

Below are some working progress photos for my first month 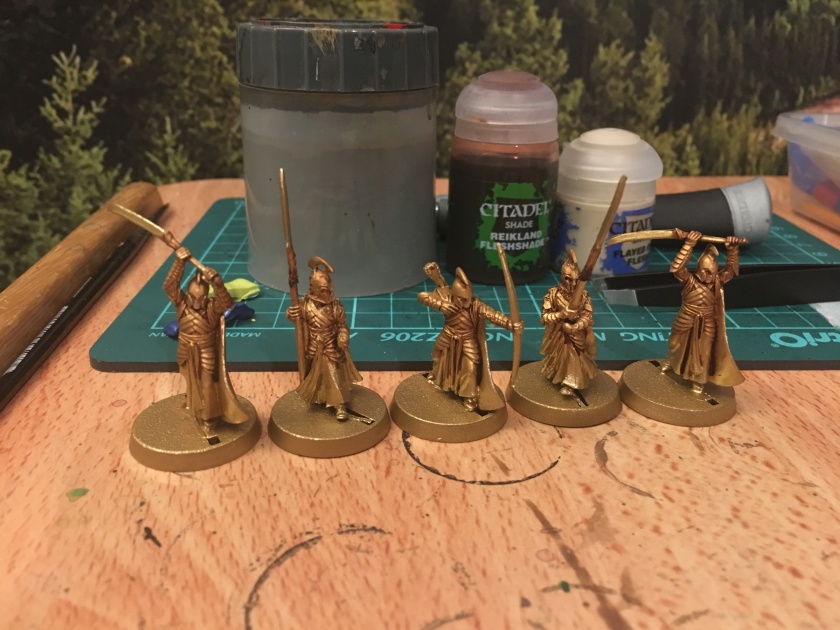 my method for these was:

step 3: Base the blue areas with Macragge Blue.

Step 4: Paint the flesh with Flayed one flesh.

I am hoping to be able to paint a few armies at the same time as 200 points is not too taxing, though at the moment I want to get as much of my Mirkwood Army as possible painted.